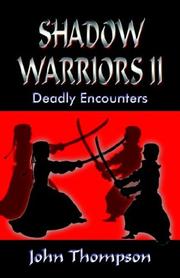 Shadow Warriors (The Bushwhackers Series Book 2) Kindle Edition by Chris Bostic (Author) › Visit Amazon's Chris Bostic Page. Find all the books, read about the author, and more. See search results for this author. Are you an author? Learn about Author Central. Chris Reviews:   “Shadow Warriors Of World War II”, subtitled: The Daring Women Of The OSS and SOE” by Gordon Thomas and Greg Lewis. Chicago Review Press, Inc. Chicago, As the subtitle states, this book is supposed to be the story of the women who were in the espionage services. Their efforts sped up the downfall of Nazi Germany/5(14). In a dramatically different tale of espionage and conspiracy in World War II, Shadow Warriors of World War II unveils the history of the courageous women who volunteered to work behind enemy lines. Shadow Warriors is the second fast paced post apocalyptic survival book in The Bushwhackers series written by author Chris Bostic. flag Like see review BJ rated it it was amazing/5.

SHADOW WARRIORS OF WORLD WAR II THE DARING WOMEN OF THE OSS AND SOE by Gordon Thomas & Greg Lewis ‧ RELEASE DATE: Jan. 1, A group biography of the fearless young women who became secret agents during World War II. In Shadow Warriors you’ll learn: •How the CIA and State Department sabotaged the administration’s Iraq war plans from the start–sparking the insurgency in the process •How a high-level State Department official gathered aides after Bush’s reelection to insist they owed no allegiance to Cited by: 4. Tracing the Wing's evolution from its humble origins, right through to its contribution to peacekeeping missions across the globe, Shadow Warriors is a fascinating look into Ireland's elite special forces. This is a great book for anyone interested in military history or looking to learn more about Ireland's 50+ years of missions with the s: Warriors is a series of novels based on the adventures and drama of several Clans of wild cats. The series is primarily set in the fictional location of White Hart Woods, and, later, Sanctuary Lake. The series is published by HarperCollins and written by authors Kate Cary, Cherith Baldry, and Tui T. Sutherland under the collective pseudonym Erin Hunter, with the plot developed by editor.